Discovering Chamonix with Naila and Marc

Taking advantage of the fact that Marc Rovira was spending a few days in Chamonix with us, I convinced him to take a trip that I had been thinking about for a long time. The idea was to leave from Les Houches and cross the Aiguilles Rouges mountain range to Vallorcine. We couldn’t find any other review on this journey, but by gathering information about shorter routes, we planned our tour. 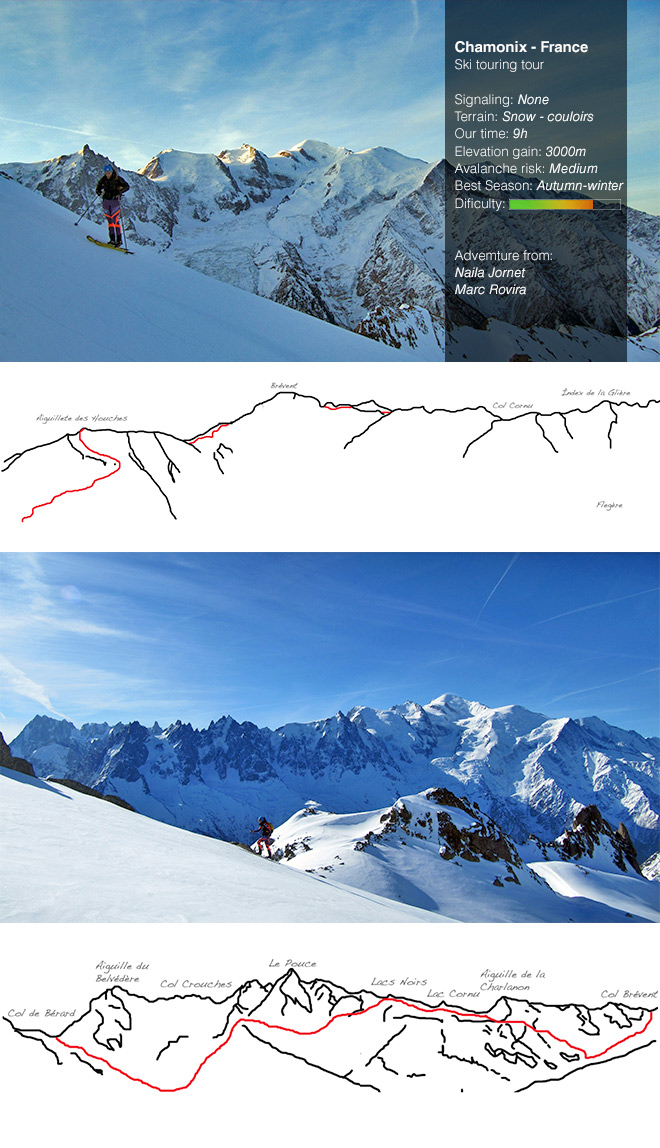 We started very early, but we didn’t know exactly how long it would take us. We wore lightweight clothing so that we would be able to go faster. We would modify our route according to the time of year and the snow conditions. In our case, we had ideal conditions, with hard snow but no ice. This allowed us to quickly ascend without worrying about the risk of avalanches on the most dangerous sections.

We departed from Les Houches on foot, following the summer route towards Aiguillete des Houches. The path forks countless times before reaching the Chalets de la Chailloux. At that point, we put on our skis and finished the climb by skiing to the top.

From the top of Aiguillete des Houches, we descended until we arrived at the Belachat mountain pass, and then ascended following the summer path towards Brévent. During our climb the sun started to come out, making it a perfect day, and the colours of the sky dawning and the views from there were simply spectacular.

Once we had arrived at the top of Brévent, we continued off-piste from the station towards the Brévent mountain pass. From there we descended the slopes following the Tour del Mont Blanc summer route. We still did not know this area and we had left the map at home. The only thing that we remembered was that at 2000m high we had to put on the fur skins to start the climb. We started to climb the side of the Aiguille de Charlanon mountain face, which had some very steep slopes that on that day were very icy. On arriving at the top of the Lac Cornu basin we saw traces of the route up, which followed the path of the river. So, it was best to descend towards the intersection with the river and then climb calmly, avoiding exposure on the side of the Aiguille de Charlanon mountain face.

Once we crossed the Lac Cornu, we climbed the Col de la Glière, to the Lacs Noirs and arrived at the top, next to Aiguille de la Glière, from where we could see the trails of Flegière. From there we started the second and last phase of the journey, a descent across the mountain faces of Aiguille de la Pouce and the Tête du Bechat. We had read that there was a unique pathway across this mountain face, but we did not find it because the heat had melted the snow and we mistakenly decided to follow different tracks. The tracks led us down a path which it was not possible to continue due to the snow conditions, so we ascended and found a small canal that ran down to the Chalets de la Balme.

Once at the bottom, we saw where we should have descended and realised that we had found a better option from the one marked out, as the other paths had worse exposure. The final climb was more manageable and led us to the Col de Bérard. There we started to find other skiers who were taking the usual routes between la Flegière and Vallorcine, ascending at Col de Dards or Pointe Alph.

The long descent to Le Buet has many paths which are exposed to avalanches. Normally avalanches are not likely as the snow is stable, but after a snowfall, it is a dangerous part of the route.

Here you have a selection of the equipment that we have used on this route, clic to discover: 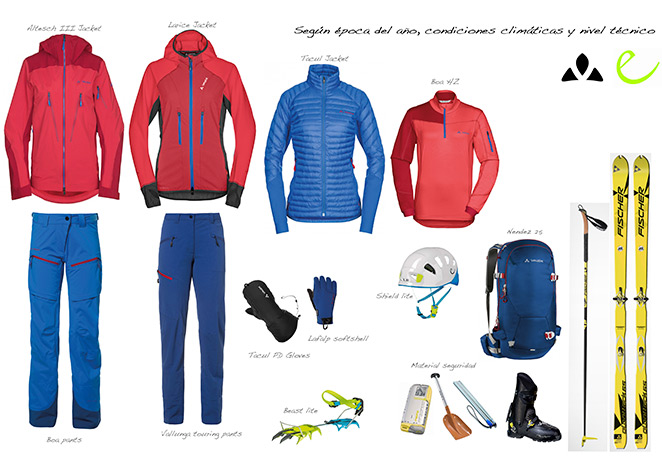